The delivery of the Federal Budget one month early means business owners now have more time to consider the merits of a new investment under the expanded instant asset write-off.

In a move that isn’t dependent on the upcoming Federal election, the new write-off threshold took effect on Budget night, 2 April.

The threshold has been expanded to $30,000 and the write-off is now available to any business with an annual turnover of less than $50 million, expanding access to medium-sized businesses to encourage growth.

Businesses can purchase assets valued at up to $30,000 and write the investment off against their 2018-19 tax return. There is no limit to the number of investments that can be made.

ACAPMA CEO Mark McKenzie said the move to expand the write-off scheme was a win for fuel retailers.

“The increase in the threshold is a major win for businesses in the fuel retail industry and has come, at least in part, through the combined advocacy efforts of ACAPMA and the Council of Small Business Organisations of Australia over the past 12 months”, he said.

The National Farmers Federation has also praised the expansion of the scheme.

“We’d requested an extension of that program. It sounds like a small commitment, but it’s a really big one for small businesses and for farmersm” said President Fiona Simson.

“Horticulture is one of our fastest growing industries — recording double-digit growth over the last decade.”

Other key budget measures include:

Tax cuts for small business have continued in 2018-2019 as part of the government’s Ten Year Enterprise Tax Plan.

The plan increased the unincorporated small business tax discount rate from 5 per cent to 8 per cent, up to a cap of $1000. This rate will increase to 16 per cent by 2026-27. By lifting the small business entity turnover threshold from $2 million to $10 million, access has also been extended to a range of small business tax concessions.

Small businesses will also benefit from the extension of the $20,000 instant asset write-off for a further 12 months to 30 June 2019.

Expanding on last year’s small business initiatives, the government has announced it will extend the $20,000 instant asset write-off for a further 12 months to 30 June, 2018. The turnover threshold will also be lifted to $10 million, five times higher than was originally available.

“This will provide a much needed shot in the arm for many small businesses across the country and will stimulate the economy and increase the investment and productivity of small business,” he said.

The Victorian Farmers Federation called for the scheme to be extended indefinitely to ensure real benefits for rural business.

FUEL retailers looking to upgrade ageing fuel storage tanks or buy new tanks for unmanned sites have been handed the perfect opportunity after the May budget. 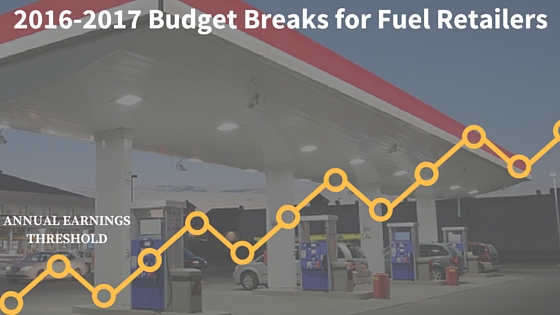 The Australasian Convenience and Petroleum Marketers Association has welcomed changes to the definition of small business that will mean more qualify for a range of tax concessions on offer, including the $20,000 instant asset write-off.

From July 2016, businesses with a turnover of less than $10 million qualify for the write-off.

Even more relevant to fuel retailers, the determination of the annual earnings threshold excludes revenue earned from fuel sales, opening the door for many more small retailers to take full advantage of the benefit.

ACAPMA chief Mark McKenzie says the change means a fuel retail business with a total annual turnover of $18 million, where fuel revenue totals $14 million and convenience store and other business revenue $4 million, would be deemed to be only earning the $4 million.

That means it could claim benefits including the instant asset write-off, a lower company tax rate of 27.5 per cent, and an 8 per cent unincorporated small business tax discount of up to $1000 for small businesses with a turnover of less than $5 million.

From Budget night, all small businesses will get an immediate tax deduction for any individual assets they buy costing less than $20,000, up from $1000.

The $20,000 small business tax break budget incentive means any small business with a turnover of up to $2 million can fully deduct the purchase price of any new assets valued at up to $20,000.

There is no limit on the number of items valued at up to $20,000 a business can purchase and deduct, and the break remain available for two years until June 2017.

The rebate, which expands on the ATO’s accelerated depreciation measures, will apply to anything from new cars and machinery to sheds and storage, including fuel storage tanks.

Business will also benefit from a 1.5 per cent tax cut for small companies, down to 28.5 per cent – the lowest small business company tax rate in almost 50 years.

“The immediate write-off of an asset under $20,000 provides real, direct benefit and cash flow to small businesses now,” he said.
“The ability to purchase a small asset to grow a small business will encourage people to become more efficient and more productive.”

NAB Agribusiness general manager Khan Horne said June had already been a busy month, and the signs were there that the budget had boosted confidence.

“There are definitely people looking at the tax incentives and how to make the most of them as they assess their business earnings and borrowing position at the end of the financial year,” he said.