How is crude oil refined? What are the products it produces? Where does Australia sit in its ability to process crude oil? Not just now but in the future? Please view our animated infographic by clicking on the image below or click here to get the answers. 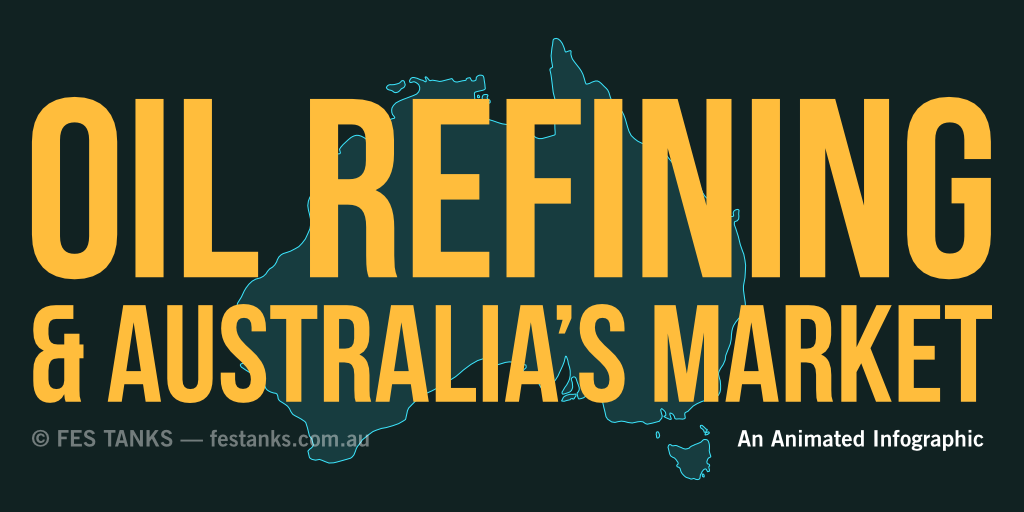 Crude oil, in its raw natural form, must undergo refinement to make it useful for consumers. An oil refinery separates, converts, and purifies the components of crude oil into valuable petrochemicals. Many products, from propane to petrol to bitumen, can come from just one barrel of crude oil through refining. Australian oil refineries were constructed in the 1950s and 1960s. Together, they have a refining capacity of approximately half a million barrels per day. Let’s look at the fundamental processes in an oil refining setup, and learn more about Australia’s role in the global oil industry.

The composition of crude oil varies greatly between different natural sources. The two most important factors for profiling crude oil are its density and its sulfur content.
Oil that is less dense is referred to as “light,” whereas denser oil is classified as “heavy.” Oil with high sulfur content is called “sour,” as opposed to “sweet” oil which contains less sulfur.
As hevay oil requires more refining than light oil to yield useful products, light oil is valued higher than heavy oil. For the same reason, oil that is sweet is more valuable than oil that is sour.
Most of the crude oil found in Australia is premium crude; light and sweet.

*Total litres exceed the volume of one barrel due to the lower density of refined products.
**Raw materials used for conversion into other products used in science and industry.

Like other industrial plants, the typical oil refinery is a large-scale operation, taking place in vast complexes with equipment the size of office buildings. Many refineries are designed to operate continuously for months at a time. The specific layout and equipment of a refinery varies greatly, and depends on both the quality of the crude oil being refined, and the market for different refined products.

Crude oil contains a variety of hydrocarbons that have different boiling points. To separate these compounds, the oil is first sent to a boiler where it is heated into a super-hot mixture of liquid and vapour called the feed. The mixture is then fed into a distillation tower. In here, the compounds with a lower boiling point rise up as vapours, while the compounds with a higher boiling point fall downwards as liquids. The tower contains trays that allow the vapour to bubble upward through the liquid, helping to exchange heat and resulting in more effective separation.

Heavy, high-boiling fractions, composed of larger hydrocarbon molecules, are often less desirable than the lighter fractions composed of smaller molecules. For this reason, some of the heavier fractions are sent to cracking units that break down the hydrocarbons into smaller components. One widely-used method, known as Fluidized Catalytic Cracking (FCC), works by exposing the oil to extreme heat and a finely powdered catalyst, which breaks apart the molecules. The heated feed and catalyst are combined in the riser. The reactor then separates the catalyst from the newly cracked product, which may be sent back for re-distillation. Meanwhile, the catalyst is cleaned and recycled in the regenerator.

The distilled product may still contain undesirable elements, the most important of which is sulfur. Fuels containing sulfur, when burned, produce pungent sulfur dioxide. Hydrotreating removes sulfur by exposing the product to hydrogen gas as well as extreme heat and a catalyst. The hydrogen atoms bond with the sulfur, converting it into hydrogen sulfide. This hydrogen sulphide gas can then be removed via re-distillation. In this example, the organosulfur compound propanethiol (C₃H₈S) is being converted into cleaner-burning propane (C₃H₈).

With a refining capacity of 146,000 barrels per day, The Kwinana Refinery is the largest oil refinery in Australia. The largest refineries in Asia, however, can process between 600,000 and 1,200,000 barrels per day. Due to the competitive advantage of Asian oil refineries, Australia’s oil refining market is in steep decline. Since 2003, 3 out of 8 Australian refineries have been de-commissioned, with a another due for de-commissioning in mid-2015. Australia now imports most of its refined products from Singapore, South Korea, and Japan.

Australia’s dependence on imports of refined products, crude oil and other refinery feedstock (ORF) has increased significantly over the last 30 years.
In 1986-87, imports of crude oil and ORF equalled 24% of domestic consumption. Today, this proportion is over 80%.
Since 2009, Australia has been the only country within the International Energy Agency without enough oil in storage to cover net demand for 3 months. In 2014, Australia had just 59 days of backup supplies.

Unless we upgrade our refining capacity or cut down our demand for petroleum products, Australia may be 100% dependent on overseas refining by as early as 2030.